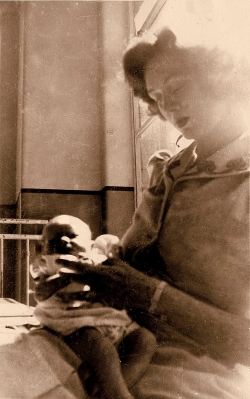 This contribution came from a VANISH member (adoptee) who wanted to find a meaningful way to acknowledge the death of her mother. There are no recognised ceremonies or rituals in the adoption community to help us with our familial losses.

The gathering was held in January 2009 at Mingary which means "The Quiet Place". It is non-denominational and welcomes all who enter.  It offers a peaceful sanctuary where people may restore a sense of strength and healing following a trauma or tragedy. Mingary is located on the Russell Street side of St. Michael's Church, Collins Street, Melbourne.

Bet gave birth to me in October 1945, just as the war was drawing to its close.  Twelve days after my birth; we were parted.  It broke both our hearts.  Six weeks later I was sent, on a troop plane, to Melbourne where I was adopted by a childless couple. From that moment on…..we lived in two different worlds. Melbourne has been my home since then.

When I searched for and met Bet in 1972, it was a joyous and traumatic time in our lives.  For a quarter of a century Bet had lived with the secrecy and shame of my birth and adoption.  Whilst it was liberating for her to no longer bear this isolating experience; our meeting brought many challenges.

Bet found the courage to tell her three daughters of my existence.  Her mother and aunt (both of whom played a central role in the arrangements for my adoption) were told that I had reentered her life and were strongly disapproving.  Despite this, Bet wanted to establish a relationship with me; the daughter she had lost so many years ago.

Bet was born in Folkestone, Kent in 1923 to Isabella (a Scottish lass) and Edward an English dandy.  In 1926 her Scottish family immigrated to Australia.  They settled in Perth where she lived for the remainder of her life. She was a proud West Australian; and was outraged when as a mature adult, she was required to take out Australian Citizenship in order to obtain a passport.  She enlisted as a WRAN in 1943 and regarded herself as a “true-blue Aussie”.

She was given the pet name “Bet” as a child; but her name was Isabel; her mother was Isabella and the name Isabel threads through many generations of Scottish female antecedents.  She gave me the birthname of Isabel; it was kept as a second Christian name by my adoptive parents; although I did not realise its significance until I learned of my adoptive status at the age of 16.

A year after after my birth Bet married John; a widower who had a two year old daughter, Valerie. Val’s mother Gladys had died two weeks after giving birth to her. Bet became Valerie’s mother; Bet and John had two daughters of their marriage.

During our first telephone conversation in 1971 Bet, through tears of joy and sorrow, recalled that at the time of my birth the world….and Vera Lynn… was singing…”We’ll meet again; don’t know where, don’t know when, but I know we will meet again some sunny day”.

It was a miracle beyond words that we met again.

Although we were separated (again) by the tyranny of distance we managed to maintain contact over the remaining years of her life.

Bet was unfailingly generous and loving towards me and my children; her grandchildren David and Kate.  The births in recent years of my grandchildren Raphael, Benjamin, Camille and Felix were a source of great delight to her.  I will ensure that they will always know that Bet was their loving and interested great-grandmother.

Bet’s funeral in Perth is taking place simultaneously with this gathering in Melbourne.  At her funeral, there will be many shared memories of her long life….. but no mention of this profoundly significant chapter in her life’s story.

So we meet here today, in a circle of adoption friendship, to remember that there was a tremendous sorrow in Bet’s life; a sorrow borne of a loss that is so often trivialised or disregarded.  We who stand here today understand and know this sorrow…………it belongs to each of us also.

Farewell dear Bet.  You have been courageous in life and ill-health.

Our hearts were once broken but thankfully we found the courage and strength to reconnect as best we were able.

Peace be with you.

Long before this final farewell.

I will not curse the time lost that might have been.

Farewell to you once loved so dearly.

How did we forget the forever of it?

I scatter you on the wind and wings

Of my memories.  Farewell.

An excerpt from the poem